Despite the ruling in Miller v. Bonta (the "assault weapons") case, being found in favor of gun owners and declaring California's assault weapon ban unconstitutional (opinion), the order has been stayed. The case will likely be adjudicated over several years. "Assault weapons" are not yet legal in California.
​There is no such thing as an “assault weapon.” This is a misnomer to demonize guns. Any weapon or object can be used to assault someone with. Semi-automatic firearms with “scary” looking features or designs are no more deadly than some very common firearms that don’t look intimidating. The weapons that California prohibits are legal in most states.

Also note that semi-automatic means one pull of the trigger gives one shot. Fully automatic means holding down the trigger fires the gun until the magazine is empty; these are machine guns. Machine guns are heavily regulated by the federal government and impossible for civilians to own in California except for Hollywood armorers who provide guns for TV and movie productions.

If you have a registered assault weapon, this resource is not for you. This is a guide to buyers trying to understand why commercially available firearms are not for sale in California.
​What is banned?
California bans three categories of "assault weapons" plus .50 BMG rifles: 11 CCR § 5499); 2000 list here.
California also bans certain other types of weapons under the “assault weapons” chapters:
Certain Olympic pistols and antique firearms (16170) are not assault weapons. (30510)

The Assault Weapons Identification Guide has not yet been revised to include 2017 legislative changes.
Can I still register an assault weapon?
If you own a pre-1989 firearm or a weapon brought into California after that point is named on the list, it cannot be registered any longer. Firearms that are California compliant cannot be registered and made into assault weapons.

​This ban has much in common with the 1994 Assault Weapons Ban (AWB) where a combination of features made a semi-automatic firearm a “assault weapon.” This ban took effect in 2000. It must be kept in mind that the modularity and popularity of AR-15 style weapons did not occur until after the 2004 sunset of the federal AWB.
Semi-automatic rifles
Semi-automatic centerfire rifle that does not have a fixed magazine has any one of the following:

The following are also prohibited:

A semi-automatic rifle with only a detachable magazine, and no other prohibited features, would be permitted. These are known as so-called “featureless” rifles.

A .22LR rifle is a rimfire rifle, not a centerfire rifle.

Note that a semi-automatic rifle that can take a “large capacity magazine” that can hold more than 10 rounds is an assault weapon, unless it is a featureless build. Despite Freedom Week, if you put a standard capacity magazine in your AR-15 (or other legal semi-auto rifle), it will become an illegal assault weapon.
Semi-automatic pistols
A semi-automatic pistol that has a detachable magazine but has any one of the following:
A standard pistol is one that you purchase in factory condition at the gun store. It will not have the above prohibited features.

Threaded handgun barrels are illegal to install in California on a standard semi-automatic pistol. They are legal to possess, but not to install them for the purpose of putting on a suppressor (silencer) or flash hider (flash suppressor), what’s the point?

Large capacity magazines may be legally used in standard pistols lacking all of the above features. The magazines must be considered legal to posses under the terms of the injunctions (see Freedom Week).
Also illegal
Note: pump-action shotguns with detachable magazines, 10 round or less capacity, are legal.

Fixed magazine semi-automatic pistols
AR pistols (and other rifle caliber pistols) are very difficult to obtain and possess in California. Due to the extreme legal complexities involved, at this time we will not be delving into that topic. If you desire a firearm of this kind, please contact a dealer who sells California compliant rifle-caliber handguns.

.50 BMG rifles
.50 Browning Machine Gun (BMG) rifles are prohibited (30610), supposedly for their long-range and penetrative abilities. Such rifles will not be covered in detail here as they cannot be bought or transferred in the state. Other .50 caliber firearms are legal.

Title 1 Firearms
So-called Title 1 firearms, which do not meet any of the above definitions, are banned effective July 1, 2020.

Can I inherit an assault weapon?
Yes, but you cannot possess it in California (30910) and if you inherit it, within 90 days, you must (30915):
Can I own a shotgun like a Mossberg Shockwave?
No. This is an “unconventional pistol,” prohibited by 31500. For those who are not aware, such firearms are essentially shotguns, but manufactured in such a way to exploit a loophole in federal law so that the firearms are not deemed short-barreled shotguns for having a barrel of less than 18 inches.

17270. As used in this part, an “unconventional pistol” means a firearm with both of the following characteristics:
(a) It does not have a rifled bore.
(b) It has a barrel or barrels of less than 18 inches in length or has an overall length of less than 26 inches.

If I disassemble my firearm, is it still an assault weapon?
Possibly, depending on the design. Specifically relating to AR-style firearms, no, it is not an assault weapon if the upper and lower receivers are separated. The theory here is that if the weapon is disassembled (or the receivers separated) it is no longer a semi-automatic firearm as it can't fire.

11 CCR § 5471. (n) “Disassembly of the firearm action” means the fire control assembly is detached from the action in such a way that the action has been interrupted and will not function. For example, disassembling the action on a two part receiver, like that on an AR-15 style firearm, would require the rear take down pin to be removed, the upper receiver lifted upwards and away from the lower receiver using the front pivot pin as the fulcrum, before the magazine may be removed.

How do I own an semi-automatic rifle?
See the sections below on featureless rifles and fixed magazine work-arounds for AR-style rifles. Some other semi-automatic designs are also legal, however, it would be best for new gun owners to speak with a dealer about what is available for sale. 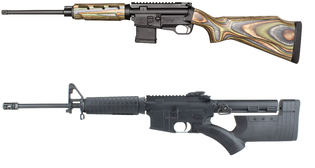 Images courtesy of Fightlite and Thorsden Customs
The first thing that comes to mind is the traditional hunting rifle, but it can apply to so many more types of rifles, even AR-15s! These rifles may still have detachable magazines, but none of the following:
Existing rifles can be bought or modified in this configuration. One wishing to modify a rifle would need to conduct additional research and purchase the necessary parts.

Featureless rifles may use 10+ round magazines that are possessed legally under the “Freedom Week” injunctions.

We present this unaffiliated link as a good guide to featureless AR-style rifles.
Detachable magazine work-arounds

Image courtesy of Patriot Pin
As California now requires magazines to be removable only after opening the action of the firearm, this creates problems for many firearm owners. As AR-style rifles are by far the most popular weapons, the particular design has allowed for many innovative products to come to market to help shooters reload faster without breaking the law.

You may not use large capacity magazines in these rifles; doing so will convert them to illegal assault weapons. If somehow you are able to legally own large capacity magazines post 11/30/2021, it may legal to use them in Registered Bullet Button Assault Weapons (RBBAW). Even with a 10+ round magazine law thrown out in the future by SCOTUS, sticking a legal large capacity magazine in a rifle may make it into an illegal "assault weapon" regardless of whether or not the magazine itself is legal to posses or not unless there are future legal developments. A stay has been issued until May 22, 2022 for 10+ magazines possessed prior to the ban or obtained during "Freedom week." Read more here.​

Most of these devices allow magazines to drop free or be released after the upper and lower receivers are separated. Some of these offerings include additional devices to more easily separate and re-connect the receivers after reloading.

There are many more products on the market and some work for firearms that are not AR-style weapons. Carefully research each product and select the one that works best for you.

What if I don’t use any of these, but I weld/rivet/etc. my magazine in place?
You will have to disconnect the receivers your AR-style rifle to reload the magazine through the top. It is possible, but very slow and awkward. The above devices help decrease that cycle time.