Pictured is a registered bullet button assault weapon (RBBAW)
Bullet Button Assault Weapon registration is closed. It is no longer possible to register such a weapon and any attempts to do so may be an admission of a crime. Installing a bullet button does not exempt you from “assault weapon” violations.
DOJ page on RBBAWs 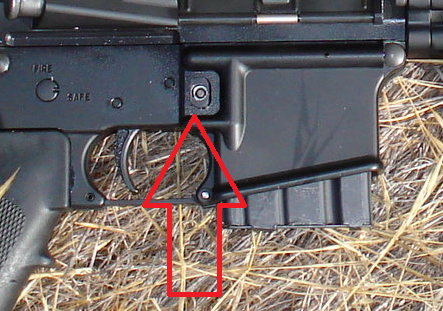 What is a bullet button?
A bullet button is a device that replaces the magazine release on a firearm wherein the magazine is fixed in place until a catch is releases by depressing the catch with the tip of a bullet. This also includes devices like magnetic locks that require a magnet to pull out the magazine catch.

Bullet Button is a trademarked term, however, in firearm circles it has come to include firearm magazines that are released by tools without disassembling the action of the firearm.

In 2000, California law changed to prohibit quick detachable magazines on certain semi-automatic weapons where the magazine could be released by manipulating a button or lever. The intent was to eliminate firearms that could be quickly reloaded or at least greatly frustrate the reloading process.

If magazines could not be removed from a gun without tools, it was decided that the firearm did not have detachable magazine. Because of varying firearm designs, it was decided that bullets counted as tools as some past designs utilized bullets as part of their disassembly process.
2009 DOJ statement on bullet buttons

In 2007, this decision was exploited by an entrepreneur to invent the Bullet Button. The Bullet Button directly replaced the magazine release and the new magazine catch could be released easily with the tip of a bullet or other similar device.

Various attempts to ban bullet button type devices were attempted. As of January 1, 2017, rifles equipped with bullet buttons are prohibited.

Because a registered bullet button assault weapon is not a fixed magazine rifle, you may use large capacity magazines (10+ rounds) in it.

You may not install a bullet button alone to keep your semi-automatic rifle from becoming an illegal assault weapon any longer.

Can I register my BBAW?
No. Registration closed at 11:59 PM, June 30, 2018. Per DOJ: “No extension will be provided, and no additional assault weapon registration applications will be accepted.” Any attempt to retroactively register your firearm may be an admission of a crime. You will need to use some of the new work-around devices to modify your rifle to a legal fixed-magazine configuration.

If my BBAW is registered, can I install a regular magazine release?
Probably not. The DOJ states it is illegal, and states the following:

It is conjectural that there is no actual prohibition against this in the Penal Code and that the DOJ and prosecutors have been unable to make assault weapon charges stick against someone who swapped the bullet button for a magazine release. This is a case where the Code of Regulations differs from the Penal Code. If you choose to swap out your bullet button, consult a firearms attorney.

If I still have bullet button installed, what do I do?
Separate the upper and lower receivers, if an AR-style rifle, or disassemble the firearm. Install one of the new work-arounds to create a fixed magazine rifle. 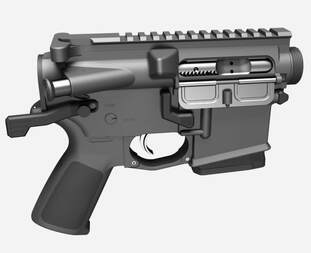 Image courtesy of Patriot Pin
As California now requires magazines to be removable only after opening the action of the firearm, this creates problems for many firearm owners. As AR-style rifles are by far the most popular weapons, the particular design has allowed for many innovative products to come to market to help shooters reload faster without breaking the law.

Most of these devices allow magazines to drop free or be released after the upper and lower receivers are separated. Some of these offerings include additional devices to more easily separate and re-connect the receivers after reloading.

There are many more products on the market and some work for firearms that are not AR-style weapons. Carefully research each product and select the one that works best for you.

What if I don’t use any of these, but I weld/rivet/etc. my magazine in place?
You will have to disconnect the receivers your AR-style rifle to reload the magazine through the top. It is possible, but very slow and awkward. The above devices help decrease that cycle time.