The pictured pistol, the US military standard-issue M17, is not for sale in California.
Remember: you cannot just order any handgun online and have it shipped to your dealer. All handguns sold to normal people (non-peace officers) in California must be approved and listed on the Certified Handgun Roster.
The purpose of this section is not to explain the Safe Handgun Roster (“the roster”) in all detail, nor to go through its flaws. The purpose is to explain why only certain state-approved firearms are allowed for sale. Many of the firearms deemed “unsafe” by California are perfectly safe and for sale to civilians all over the country. Many of the “unsafe” firearms are carried by law enforcement daily.

If these guns are so unsafe, why can peace officers carry them in public? Why does the state allow them to be re-sold outside of California? Why does the federal government allow these unsafe guns at all? The roster is not about safety; it’s about restricting handgun ownership.
Official DOJ Roster of Certified Handguns search
What is an “unsafe handgun”? (legally speaking)
On the surface, some of the restrictions are common sense product safety requirements (31900 & 31905). Most of the true safety requirements are handled under existing product liability case law and federal regulations. However, many of these requirements are not actually necessary for handguns to be safe and the state abuses these requirements to essentially limit the variety handguns sold in the state. Though this information is not necessary for handgun buyers to know, it is important to understand exactly what the state is requiring of handguns. 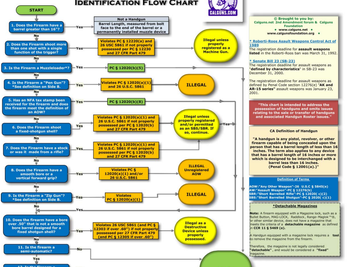 32000(c)(1) prohibits FFLs from selling “unsafe handguns” to non-peace officers. Peace officers can sell their off-roster guns to the general public through a legal private sale if the officer truly bought the gun for himself originally. However, this practice is under intense scrutiny because of several high-profile cases of officers trafficking guns illegally. As a consequence, the supply of legal off-roster handguns coming from peace officers will dwindle.

How do I legally get an off-roster gun?
Guns that are off-roster can be privately sold, so weapons that came to California legally one way or another, but no longer are on the roster, can still be sold privately. Check consignments and private sale listings.

If you have a relative (parent/grandchild relationship) out-of-state, they can transfer an off-roster gun to you. See the section under Buying Guns for details on the Intra-Familial Transfer.

Is there a roster for approved rifles and shotguns?
No. Purchasers of weapons online would need to ensure that the firearms are compliant with California’s “assault weapons” law.

SB 489 in 2003 required that semi-automatic pistols have a loaded chamber indicator (a little bit of metal that protrudes from the slide when a cartridge in the chamber pushes the indicator out) and disconnected that keeps the gun from firing if there is no magazine inserted.

This was prompted by children finding unsecured guns and deaths or injuries resulting because the child didn't realize that merely removing the magazine doesn't make the gun unloaded. Instead of mandating gun safety training in schools or accepting that parents will be irresponsible and there is little the state can do about it, California burdened gun owners.

Supposedly, children would see the loaded chamber indicator and think "Oh, this gun is loaded! I better not pull the trigger," and if the child wasn't observant or old enough to notice that, the gun wouldn't fire if there was no magazine inserted. The magazine disconnect was particularly loathed by police who fear in an extreme circumstance during reloading they would be unable to get a shot off.

AB 1471 in 2007 added a “microstamping” requirement where the firing pin would imprint a microscopic serial number on any fired cartridge. In theory, law enforcement could trace a gun based on the cartridges it left behind. In reality, since this technology was patented and available from one manufacturer, it was not able to be used by the industry, so the requirement was not implemented.

"Microstamping” is a pointless endeavor because firing pins can be easily swapped out for non-micro-stamped firing pins and the microscopic letting would quickly wear away. Again, the ultimate intent was to reduce the availability of handguns under the guise of safety and crime control. Even under ideal circumstances, most guns used in crimes where police need to identify the shooter from the gun, the gun trace will only tell the police who originally bought the gun, which was likely stolen.

On the surface, some of the restrictions are common sense product safety requirements (31900 & 31905). In the past, many very cheap and frankly dangerous handguns were available to buyers. Product liability laws and the federal Gun Control Act of 1968 eliminated the worst of the worst guns. Federal regulations also ensure that truly unsafe firearms cannot be sold.

However, California has used handgun safety requirements as a way to slowly eradicate handgun ownership. Restrictions on features and the odious approval process has deterred many firearms manufacturers from selling handguns in California. The roster is shrinking every year. This article explains why:

As some firearms are not designed with the mechanisms California requires, they cannot meet the state’s criteria and are unavailable for sale to the general public. Moreover, some manufacturers are reluctant to send every minor variation of a compliant model firearm off for the costly and time-consuming process of certification. Therefore, there are a large variety of perfectly functional handguns that Americans in almost every jurisdiction across the country use for self-defense, hunting, and sport shooting that are unavailable for sale in the Golden State.

Comparing guns to cars, this requirement would be like the Highway Patrol requiring all car makers to submit a sample vehicle for each model they want to sell in California. Every year and for every variation. Selling a pickup truck? CHP will need one basic work truck model, the upgraded model, the deluxe model, and each one of the limited edition models. Don’t forget to include both the two-wheel drive and four-wheel drive versions. And do it again every year.

How many car manufacturers would continue to tell in California? Especially if California added requirements that no other states have (more than they already do). Predictably, the list of new cars available in California would shrink. In the gun world, gun manufacturers are selling 2003 model vehicles that they continue to produce alongside their 2020 product line.

The roster was upheld in a “bizarre” ruling by the Ninth Circuit and the Supreme Court declined to hear the case.