California does not honor any non-resident concealed firearm permits and they do not issue non-resident permits. Open and concealed carry is exempted in your home or your business, including camp sites or hotel room (temporary residence). As a non-resident just visiting the state, you do not have to register your gun and your handguns are not restricted to what is on the Safe Handgun Roster. If you own it (and it is not an "assault weapon") you can bring it. That means your Gen 5 Glock that is not for sale in California is legal for you to bring, with 10 round magazines. There are no restrictions on hollow-points.

Open carry is only legal in unincorporated areas where target shooting or hunting is allowed (discharge of firearms). Unloaded open carry in urban areas is illegal. You cannot openly carry in a vehicle or on a motorcycle. Check county ordinances to see the areas where shooting is prohibited. For instance, the entirety of San Mateo County is practically prohibited for target shooting, while Mariposa County has very few restrictions.
traveling to other western states?

​Carry and Transport of Firearms

Concealed Carry
California does not honor any non-resident concealed firearm permits and they do not issue non-resident permits. Open and concealed carry is exempted in your home or your business, including hotel room (temporary residence) (25605), or campsites (25550).

If you are traveling, you are exempt if your firearm is unloaded and in a locked container. You cannot make unnecessary stops. A firearm this out of sight (under the seat, under a towel, etc.) would be considered illegally concealed, even if it is a long gun.

​25505.  In order for a firearm to be exempted under this article, while being transported to or from a place, the firearm shall be unloaded and kept in a locked container, and the course of travel shall include only those deviations between authorized locations as are reasonably necessary under the circumstances. 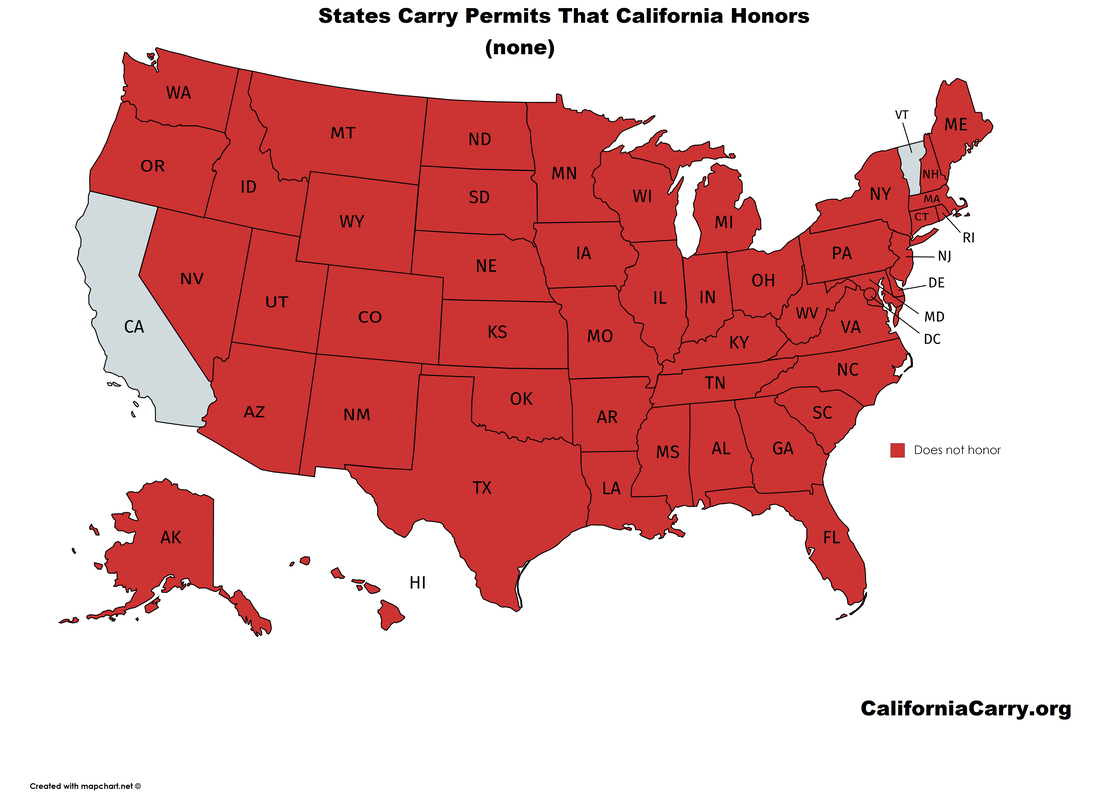 Open Carry
Open carry is generally illegal in urbanized/populated areas of California either loaded or unloaded. The days of unloaded open carry being legal in cities is long gone.

Open carry (loaded or unloaded) is legal only in an unincorporated portion of a county where there is no prohibition on discharge of firearms (rural and semi-wilderness areas).

This does not apply to your home, temporary residence, or campsite (26055, 26383, or 26405(a)), where you may legally openly carry. A moving motorhome/trailer may not be considered a “residence.”

Note: trigger and cable locks along do not satisfy the locked container requirement.

Note: you must be transporting the handgun between someplace you can legally have the firearm. (i.e. Arizona to your hotel room). You cannot simply carry around a locked up firearm in a vehicle just in case you need to use it while going about daily life.

Long guns
While the long-gun is in a vehicle, there is no destination requirement. You can simply carry it around with your in the vehicle, as long as it is unloaded and carried openly, or meets the locked container requirements.

If you take the long gun out of a vehicle, it must be carried unloaded in a locked, purpose made gun case (16505).

Unattended vehicle
Handguns must be stored out of sight in a locked container, trunk, or tool box (25140) unloaded in a locked, purpose made gun case (16850) when left unattended in a parked vehicle. ​Why out of sight? Because if a criminal sees a gun case sitting in a car, he can break the window and steal it. Legislators don't want any temptations. 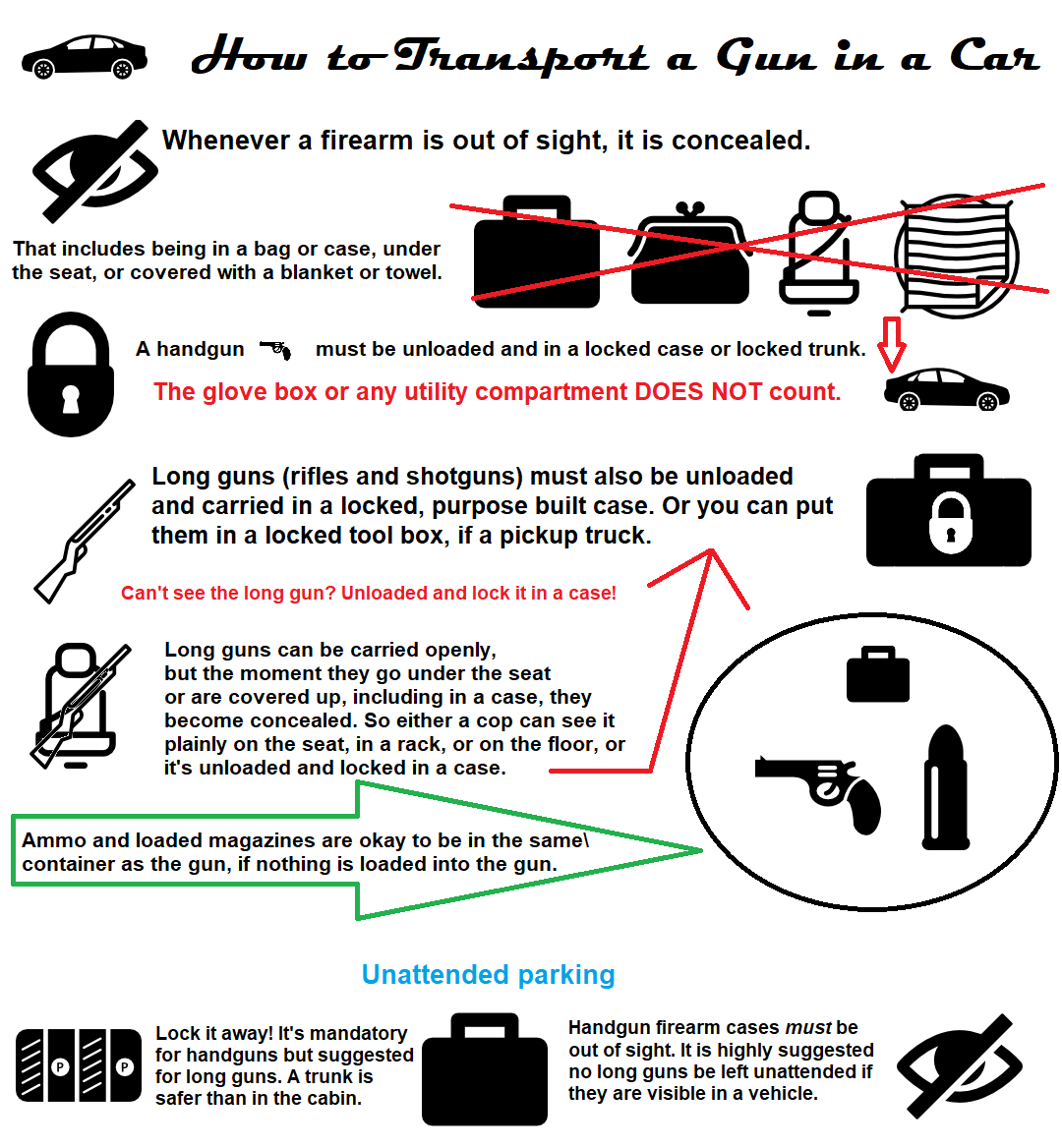 US Forests and BLM lands
The USFS prohibits shooting within 100 yards of a campground (36 CFR § 261.10) but otherwise shooting is fine, absent some other local ordinance/restriction or a seasonal fire restriction shooting ban. BLM only regulates shooting in campgrounds and other developed areas (43 CFR § 8365.2-5). Again, local, special, or seasonal shooting restrictions may apply.

School zones
Per 626.9  you may not:
Handguns must be transported unloaded, in a locked case, through a school zone.

Click for a larger version
Can I drive around with an unloaded gun with me, just in case I need it?
Not for a handgun, but yes for an unloaded openly carried long gun. You must be transporting a handgun between someplace you can legally have the handgun. You cannot simply carry around a locked up handgun in a vehicle just in case you need to use it while going about daily life.

25400(a) makes it illegal to carry within a vehicle a concealed handgun, loaded or unloaded. Remember a gun in box, case, or bag is still concealed. Then the exceptions for where you can transport a handgun to/from come into play. So if the purpose you are transporting your gun for isn’t specifically excused, you can’t drive it

25850(a), [loaded firearm], 26350(a)(2) [unloaded handgun], and make it illegal to have a handgun or loaded firearm on or about the person in a vehicle in prohibited areas. 26400(a) still allows unloaded firearms that are not handguns to be carried inside a vehicle if all other laws are complied with.
Can my ammo/magazines be in the same locked container as my handgun?
California has no laws prohibiting ammunition or loaded magazines from being in the same container as the firearm as long as there is no ammo loaded into the gun. The question is, can you readily access the ammunition?

25400. (h)(A) The pistol, revolver, or other firearm capable of being concealed upon the person is loaded, or both it and the unexpended ammunition capable of being discharged from it are in the immediate possession of the person or readily accessible to that person.

​A locked case would not be readily accessible. Additionally, CHP says the following:

Ammunition may be kept in the same container or trunk, but the handgun must remain unloaded with no rounds in the cylinder and no loaded magazines in the magazine well. (CHP FAQ)

“Assault weapons” are illegal. In short, certain listed firearms, standard AR-15 and AK pattern rifles (30510) and any center-fire rifle with a detachable magazine and pistol grip is illegal (30515). A Mini-14 in a traditional stock without a flash-hider or bayonet lug (any other prohibited features) would be legal.

Bullet button rifles are now illegal; if you have one you cannot bring it to California. There are new work-arounds, however.

​What is a “loaded” firearm?
Note: the 16840(a) definition only applies to the crime of “armed criminal action” (when you are carrying with criminal intent to hurt/kill someone); it is not applicable to peaceable carry.

16840. (b) As used in Chapter 2 (commencing with Section 25100) of Division 4 of Title 4, in subparagraph (A) of paragraph (6) of subdivision (c) of Section 25400, and in Sections 25850 to 26055, inclusive,
(1) A firearm shall be deemed to be “loaded” when there is an unexpended cartridge or shell, consisting of a case that holds a charge of powder and a bullet or shot, in, or attached in any manner to, the firearm, including, but not limited to, in the firing chamber, magazine, or clip thereof attached to the firearm.
(2) Notwithstanding paragraph (1), a muzzle-loader firearm shall be deemed to be loaded when it is capped or primed and has a powder charge and ball or shot in the barrel or cylinder.

Under the commonly understood meaning of the term 'loaded,' a firearm is 'loaded'" when a shell or cartridge has been placed into a position from which it can be fired; the shotgun is not ‘loaded’ if the shell or cartridge is stored elsewhere and not yet placed in a firing position. The shells here were placed in a separate storage compartment of the shotgun and were not yet 'loaded' as the term is commonly understood. People v. Clark (1996) 45 Cal.App.4th 1147,1153 [53 Cal.Rptr.2d 99]

​I’m visiting California. Do I have to register my guns?
No. Penal Code section 27560 requires persons bringing firearms in to California to dispose of them or register them within 60 days.

27560.  (a) Within 60 days of bringing a handgun, and commencing January 1, 2014, any firearm, into this state, a personal firearm importer shall do one of the following:

So unless you and your guns are staying for more than 60 days, you don’t have to notify the DOJ about your guns. This would only apply if you move to California permanently or are leaving a firearm behind.

“When do I become a resident of California?” you ask. If you plan to live in California, as your home, you are a resident. We’re not going to go into all the details of when you take up residency here. Use common sense and Google.

Does my handgun have to be on the Safe Handgun Roster?
No, this only applies to new guns being sold by dealers and you cannot buy a firearm as non-resident.

Will I get arrested for having an unregistered gun?
There are two scenarios: one, you are abiding by all California laws; two, you are carrying a concealed firearm illegal for protection.

Two: if you are carrying concealed illegally, we presume that you have weighed that the risk of death or injury if you are unarmed is more dangerous than the criminal penalties if caught. You would carry legally, but California refuses to recognize your out-of-state CCW. The question here is, does the 25400(c)(6)(B) loaded and unregistered gun enhancement come into play?

The punishment may be a felony or it may be a misdemeanor, punishable by up to a year in jail and/or a $1,000.00 fine. That section is meant for criminals carrying stolen/black market guns. Since you would otherwise be a law-abiding individual, you will likely get a plea deal for a misdemeanor. You will lose your CCW in your home state.

If the situation is more complicated that being found with the concealed weapon; perhaps there is a bad shooting, felony charges may be pursued. This would be the realm of a good defense attorney.